Using rating data to predict how much people will like a product is more tricky than it seems. Even though ratings often get treated as if they were a kind of measurement, they are actually a ranking. The difference is not just academic. In this blog post I show how using an appropriate model for such data improves prediction accuracy. 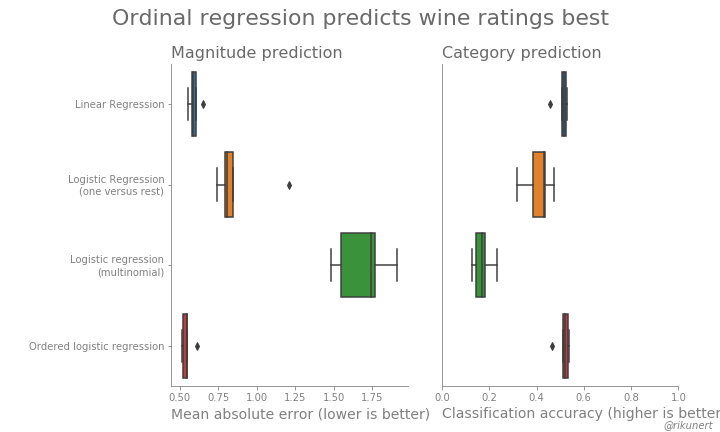 It is very common to assess the quality of a product by using customer ratings. People have no trouble putting a number on how much they like something. Companies love this sort of data as it offers a way to predict what customers will appreciate and what they will hate. However, how does one use such data best in order to derive optimal predictions?

Unfortunately, there is no guarantee that raters thought of the scale in the same way. We only know that a rating of 2 is better than a rating of 1, but we don’t know by how much. Such data is essentially a ranking, i.e. ordinal data. It’s better to think of ratings as categories which are ordered from very bad to excellent.

Let’s take an example. I will use a data set of 4898 Portuguese white wine ratings found here originally published by Cortez et al. (2009). Each of the wines was tasted by at least three “sensory assessors” using a blind rating procedure. The final score is the median of the individual ratings whereby zero represents “very bad” and ten “excellent”.

We start off by importing the data directly from the Internet and saving it in a DataFrame called df. 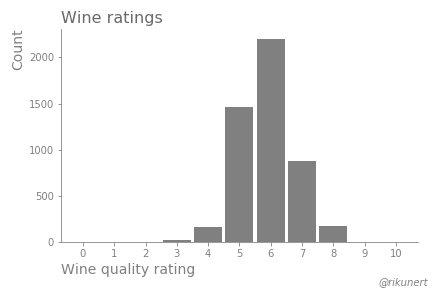 If we think of ratings as a kind of measurement, their prediction is a regression problem. I will assess the resulting accuracy of this approach using a multiple linear regression.

If, on the other hand, we think of ratings as categories, their prediction is a classification problem. I will assess the resulting accuracy of this approach using logistic regression. In this scenario, each sample could be classified into one of 11 categories. We solve this multiclass classification issue by trying out both a one versus the rest scheme and a multinomial approach.

I will use five-fold cross-validation to assess the performance of the models trained on a randomly chosen 80% of the data. The ratings in the remaining 20% of the data are predicted. The absolute difference between predicted ratings and actual ratings gives a sense of the accuracy of each model.

The following code implements exactly this.

It turns out that treating rating data as ordinal data results in predictions which are very close to the actual ratings. On a scale from 0 to 10, the ordered logistic regression is on average only 0.55 off. That’s lower than the 0.59 of linear regression and the 0.87 and 1.69 of logistic regression.

What if we switch from a regression assessment to a classification assessment? What is the accuracy of the predicted categorical ratings?

I will again use five-fold cross-validation to assess the models. The categorical accuracy gets assessed for each fold. That is, when a predicted rating is exactly right, it’s counted as a success. Everything else is counted as a prediction failure. Accuracy is equivalent to the propotion of successes.

The following code implements exactly this.

It pays to treat ratings as ordinal data

The complete code to recreate the analyses and plots of this blog post can be found on github here.